I have just begun brainstorming with a Cuban actress for a project that will include her live performance, multimedia and poetry. It has me thinking about the characteristics of the various art forms on their own and how they will work together, can work together and whether they are “collaborating art forms” or elements from differing art forms that collaborate to create a single art form (in this case Performance).

Isn’t this the same kind of question we are asking about video technology and poetry?

Despite my own penchant for the written word and visual impression of the written word as intrinsic to some poems, I concede easily to the idea that poetry is also defined as the metaphoric use of language and can be an exclusively aural experience.

However, is it possible to have a “videopoem” that has no words or oral language whatsoever? Does it count as poetry if the words alone don’t convey a poem, but rely upon the visual elements to convey an idea? If so- is this poetry or is this “elements of poetry” (if so-which then??) collaborating with elements of film to create a new art form?

Isn’t perhaps videopoetry actually more like performance than poetry and therefore videoperformance?
(I am excluding documentation of performances here in my tentative genre).

What are your thoughts? 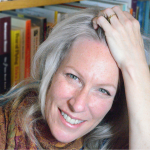 Ren (Katherine) Powell is a poet, playwright, translator and teaching artist. She is a native Californian living on the west coast of Norway.