I’ve always been interested in experimental poetry, that is, exploring new ways to express an old form. I began by creating visual poems on the page as well as combining poetry with performance art. When I produced my first “videopoem” in 1978, I was a member of an artist-run gallery, the Vehicule Art Gallery in Montreal, where I was witnessing the advancements in painting, in installation and performance art, in graphic, multi-media and video art, so it was almost natural for me to experiment with video. I no longer saw poetry as limited to the printed page. Over the years, I produced numerous videopoems, which led me eventually into the video production field, where I began writing and producing documentaries, as well as other commercial work.

These days I am in the process of completing my research on materials for an examination of videopoetry (or filmpoems, as they were referred to in an earlier time). I began producing videopoems in 1978; now more than 30 years later, I find myself teaching a course in “Word and Image” at the University of the Fraser Valley here in BC, Canada. For the past 2 years, I have travelled to various archives in Berlin, Buenos Aires, San Francisco, Chicago, New York, Toronto, taking notes on the work I encountered, eventually arriving at a workable definition and five main categories of the genre.

Videopoetry is a genre of poetry displayed on a screen, distinguished by its time-based, poetic juxtaposition of text with images and sound. In the measured blending of these 3 elements, it produces in the viewer the realization of a poetic experience.

The poetic juxtaposition of the elements implies an appreciation of the weight and reach of each element; the method is analogous to the poet’s process of selecting just-the-right word or phrase and positioning these in a concentrated “vertical” pattern.

To differentiate it from other forms of cinema, the principal function of a videopoem is to demonstrate the process of thought and the simultaneity of experience, expressed in words — visible and/or audible — whose meaning is blended with but not illustrated by the images.

In its early stages, “poetry film” used text to illustrate the soundtrack (for example, the vocal performance of a poem whose text is simultaneously presented on the screen) or illustrated the text with images which are easily identifiable with their verbal references. It has also been used to describe recorded performances at poetry readings and, in many cases, music videos with poetic elements.

There are 5 principal forms of videopoetry, including a combination of any of these:

KINETIC TEXT is essentially the simple animation of text over a neutral background. These works owe much to concrete and patterned poetry in their style — the use of different fonts, sizes, colours to create unusual visual representations of text.

VISUAL TEXT, or words superimposed over video/film images, presents the most significant challenge to the videopoet — to integrate the 3 elements. The role of the videopoet is to be an artist/juggler — a visual artist, sound artist, and poet combined — to juggle image, sound and text so that their juxtaposition will create a new entity, an art object, a videopoem. Text can include “found text”, i.e. image as text.

SOUND TEXT, or poetry narrated over video/film, is the videopoem without “superimposed text”. The “text” of the videopoem is expressed through the voice of the poet, accompanying the video/film images on the screen. Of the five forms of videopoetry, SOUND TEXT — with or without music — is the most popular; essentially, this is due to the facility of working within the traditional form of video/film, i.e. using the narrative techniques of the medium — without the additional difficulty presented by visual text — to illustrate a previously written poem. Once the illustrative function is removed, the work appears as the non-referential juxtaposition of sound and image.

PERFORMANCE is the appearance of the poet, on-camera, performing the poem. Some poets will mimic the MTV-music video style of presentation.

CIN(E)POETRY is the videopoem wherein the text is superimposed over graphics, still images, or “painted” with the assistance of a computer program. It closely resembles VISUAL TEXT, except the imagery is computer-generated, not captured by a motion picture camera. The term was introduced by George Aguilar, who works most often in this form.

In addition to image and sound, text is THE essential “element” or raw material of a videopoem, implying a differentiation from the ‘poetic film’ which relies, almost exclusively, on the visual treatment — the composition and editing of the images — in contradistinction to its verbal treatment. Indeed, the text, whether displayed on the screen or heard on the soundtrack of a videopoem, need not be an appropriation of a previously published poem.

What differentiates videopoems from poetry-films today is the use of non-poetic texts to effect the experience of a poem — my interpretation of Maya Deren’s “verticality” — in which the text, when extracted and examined as an independent element, can not be identified as “poetry”. The poetry is the RESULT of the juxtaposed, blended use of text with imagery and sound. 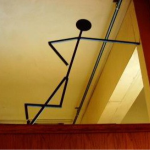