Videopoetry1 is a genre of poetry displayed on a screen, distinguished by its time-based, poetic juxtaposition of images with text and sound. In the measured blending of these three elements, it produces in the viewer the realization of a poetic experience.

Presented as a multimedia object of a fixed duration, the principal function of a videopoem is to demonstrate the process of thought and the simultaneity of experience, expressed in words – visible and/or audible – whose meaning is blended with, but not illustrated by, the images and the soundtrack.

This definition is an interesting approach as Tom Konyves puts videopoems into the tradition of poetry, rather than film per se and therefore allows a media-specific transgression of the genre from the page to the stage to the screen. From a scholarly approach, this expansion provides a back-bone for analysis that one can rely on. The challenge that many teachers (especially from literature departments) face, but will hopefully embrace, is to stay open to new media developments and experimental art forms that have merged with poetry at specific points since the early 20th century and will continue to do so.

At this current juncture, I believe that it will be important to learn more about certain trajectories as well as about individuals, i.e. where videopoets see themselves aesthetically, ideologically, where they think they come from, who they felt was inspirational for their work and what it is that drives them into this complex relationship between words, images and sounds in a world that is already saturated with media. George Aguliar’s machinima Warriors of Aliveness is a vivid reflection of that current mode of existence. Poetry has always had the potential to express an alienation between the self and its environment for numerous reasons. In the course of a century, poetry has begun to adjust to and align itself with the visual arts and sound in order to continue to explore its own (up)rootedness and to branch out to new media art forms.

Consequently, it requires people in the arts and academia to see multiple strands of traditions and trajectories where the arts have crossed their creative paths. In my book Poetry Goes Intermedia (2010) I treat videopoems/Cin(E-) poems/poetry films as an intermedia art form, which requires an openness towards the sheer power of the intermedia arts that one can only hope will begin to flood universities. Some of the best works today – such as The Dice Player by Nissmah Roshdy – come out of media departments, so change is already happening. Where academia is still lagging behind is to introduce students (i.e. practitioners and non-practitioners alike) to a century-long practice of an art form that has so far largely been ignored. We need more experts who know about various styles of filmmaking as well as about new media art developments.

The vast collection of videopoems on Dave Bonta’s movingpoems site will help us to begin to see various forms of relations. By archiving and curating videopoems one may begin to be able to draw connections between them, such as, for example, “nature videopoems”, “feminist videopoems”, “anti-war videopoems” and many other thematic relations. The website will help us to investigate who creates these films and who collaborates with whom to be able to further explore where certain networks have emerged on a local and global scale.

The literary and oral legacy of written and recorded poetry provides artists globally with a range of poems that have not yet been put to screen. It is different with poems that are written for the screen. Opening oneself up to different media will put the verbal back into the picture (literally), which might be the one critical tool that keeps our responses to various forms of media in a productive distance and provides us with new perspectives on literary creations as well.

One unifying criteria that Tom Konyves proposes in order to define a videopoem is that it holds “a poetic experience.” It would be interesting to exchange ideas with people from various parts of the world as to see how they define a poetic experience, i.e. if it still retains its universal quality that it seems to have and whether this transcends the medium of verbal poetry. A poetic experience is something one can have in nature, in a city, by looking into the face of another person, as a response to injustice, to the news on television etc.– i.e. the source can be located anywhere (without ever even expressing it). It can also revolve around the construction of emotions, thoughts, images etc. that emerge from a digital remix that is driven by creative insights on previously mediated forms of poetic expressions. From the point of the viewer, in order to get in contact with this “poetic experience” on the screen, what may be the best place to experience a videopoem? A computer screen? A movie theater? A museum? A videopoet’s home studio? A handheld device?

If meaningful image-sounds-word relationships change and evolve, then so will our thoughts on these creative productions, and we will ultimately develop a critical language to analyze them together with our students, who will be more and more exposed to videopoems and new media art.

A question that comes up, and about which Tom Konyves goes into detail in his manifesto, is whether there are limitations with regard to the narrative mode and a poetic experience, and whether a visual impression can create this poetic experience despite or even because a documentary or narrative style accompanies it. How “poetic” do each of the media (verbal/sound/images) have to be? What makes this “balance”? What if the medial components blend perfectly, i.e. create a poetic experience, but are not necessarily juxtaposing each other as in one of my favorite short animated films, Ryan Larkin’s Walking, but as well in Billy Collins’ The Dead? In short, how does the art of blending come into play as opposed to the art of illustrating?

Yet, regardless of how analytically one may want to approach these questions, the power that videopoems hold is that they give us the chance to explore poetic experiences from many parts of the world, to collaborate and share them online, and to allow poetry to continue to shape us as human beings.

lIn a German context the term videopoem may evoke a video tape and thus comes across as dated, but I am using the term here in my response as it points to Tom Konyves’ manifesto where it has many layers of meaning. (back) 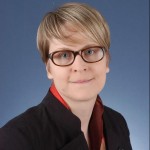 Martina Pfeiler is an Assistant Professor in American Studies, currently teaching at the Ruhr-Universität Bochum in Germany. She is working on a new book project titled Ahab in Love: The Creative Reception of Moby-Dick in Popular Culture. In 2010 she published the book Poetry Goes Intermedia: U.S.-amerikanische Lyrik des 20. und 21. Jahrhunderts aus kultur- und medienwissenschaftlicher Perspektive (2010). She has lectured and published on poetry films and in 2007 she was invited to Brazil to teach a workshop on “Poetry and New Media: from U.S.-American Performance Poetry to Cin(E-)Poetry to Poetry on the Internet” at UNESP, Araraquara. In 2003 she published the book Sounds of Poetry: Contemporary American Performance Poets following a research period at SUNY New Paltz and in Woodstock, NY, for her M.A. thesis at the Karl-Franzens-University in Graz, Austria. She has also taught in the U.S.A. and in the Netherlands.