Getting girls to participate more fully in technology and expressive writing

The camp is the result of a brainstorm between David Perez and me. I ran a poetry-writing summer camp in 2013 in San Jose, and I wanted to do something like that again, but with video poetry. I was aware that Alastair Cook and Marc Neys had taught video poetry to children, with very successful results. Since I’ve taught mostly teens, I imagined a camp for students of that age group. David took it a step further: why not run a camp for teen girls? It would combine art, writing and technology, and serve an audience that might otherwise not have this kind of experience.

Studies show that girls generally outperform boys academically until middle school, when they fall behind. This is exactly the same time that boys leap ahead of girls, exploring, taking risks, and experimenting with technology. We wanted to do something about that, using video poetry as our medium. Video poetry, a blend of art, writing, and technology, will teach our students many new skills: filming, photography, editing, story-boarding, and how to envision their poem as visual art. They will also be able to share the films they make with their friends and family.

The three of us have worked extensively in teaching, writing and performance to students in middle and high schools. David is also a filmmaker and photographer, and has made his own video poems. (As the columnist for The Third Form, I’ve watched hundreds of video poems, and commented on many, but I’ll be teaching poetry.) Jennifer Gigantino will teach video editing, videography and special effects. Jennifer Swanton Brown, co-founder and Poet Laureate of Cupertino, has worked in the classroom teaching poetry to children since 2000 as part of California Poets in the Schools, a 50-year-old arts organization. We also have spoken-word poet Kim Johnson on board, a performer and youth poetry instructor.

We aim to get our students out shooting film and taking pictures on the first day. Our curriculum will be mostly hands-on, with demonstration and guidance from our staff. We’ll have the girls create video-haikus to start, and then longer works as they gain skill and confidence. They will be engaged in a course of study that will encourage them to participate more fully in technology and expressive writing.

When poets see video poems for the first time

Technology and expressive writing were evident on February 13, 2015, when I participated in a panel titled “Powering Up Your Poetry with Film” at the 2015 San Francisco Writers Conference. Among panel sessions with titles such as “The World of Romance Fiction” and “The Elements of Killer Thrillers,” a group of poets gave the outsider art of poetry film their full attention. I was one of three panelists. The other two, poets Joan Gelfand and Chris Cole, are well-known in the Bay Area arts scene, as is our moderator, Rebecca Foust.

Although we did not prepare as a group beforehand, Joan, Chris and I agreed to introduce our work with little explanation, letting the films speak for themselves. It’s fairly difficult to describe video poetry to someone who has never seen it before. It’s better to just show the film and answer questions later, allowing the first-time viewer his or her own discovery. And that’s how we ran the panel: a short intro, the films, and then an extended Q&A.

Chris Cole made several short films, which he calls “journal entries,” as complements to his novel, the speed at which I travel. He used still shots, his own and public domain images, combining them with narration to create highly watchable, well-edited visual collages:

Joan Gelfand’s video was based on her poem, “The Ferlinghetti School of Poetics,” a poem from her 2014 book, The Long Blue Room. It is not ready for release yet, but Joan promised that it’s coming soon. A Hollywood filmmaker created the video for Joan, and it’s a compelling blend of images, both moving and still, and sound.

I showed the video poem “Arrhythmia,” which Swoon made using my poem, some film I shot of my son drawing, and Michael Dickes’ narration:

The audience for the panel leaned forward in their seats, clearly impressed and—as Rebecca, our moderator stated—“intruded upon.” In general, when poets see video poems for the first time, they are both amazed and empowered: amazed because they’ve never seen anything like a video poem before, and empowered because they immediately want to make their own (or have someone make one for them). That’s how I felt the first time I stumbled across Moving Poems a few years ago, and I recognized the combination of excitement and enthusiasm that sparks creativity. 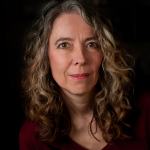