It’s great to see The Fundamentals of Neuroscience embrace video poetry. Any organization that uses an art form such as this is in my opinion groundbreaking. The main reason why I even mention it is because by doing so it increases our audience.

A Nose That Can See Is Worth Two That Sniff is one in a series of animations illustrating their online course at Harvard University. Another fun one to watch, although not a video poem, is Perception Is In The Eye Of The Beholder:

Makes me want to enroll in the course.

Now getting back to A Nose That Can See Is Worth Two That Sniff: The work is incredibly charming. Beginning with the visual (my favorite place to start), the colors are somewhat subdued. This allows the viewer to glide through the poem without distraction. The illustrations are made up of flat vector computer-generated shapes. The old scratchy film effect combined with vector imagery makes it even more interesting. It’s a great blend and adds to the atmosphere of the piece. The outcome is not only successful, but bears the imprint of the artist’s unique style. I love the use of type, and the movement is terrific.

There is an echo in the voice. My guess is that it was recorded on computer or using a small microphone. It’s the poet’s own voice, which is a nice, simple touch. Perhaps the sound is deliberately distressed to match the visuals.

All in all, A Nose That Can See is Worth Two That Sniff is well worth checking out. 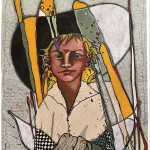