The focus of this year’s ZEBRA Poetry Film Festival Münster|Berlin was the Netherlands and Flanders (Belgium). Since I’m Flemish, maybe that was one of the reasons they asked me to be on the jury.

I did not get a chance to see other than the selected films this year, nor to visit any of the extras that ZEBRA’s program had to offer. Maybe that’s a shame, but maybe it also made me a more focused visitor than I was at my previous visits to Zebra.

Eighty films. That’s how many we had to see in two days. Eighty films from which to pick four winners. Hmm… That’s a lot.

The other members of the jury were filmmaker and festival organizer Juliane Fuchs and poet Sabine Scho — two women with a clear view and a strong interest in videopoetry/poetry films. They were also a delight to work with.

A few things I’d like to say about our goals as jury: We congratulate all the filmmakers, artists and poets who were chosen by the selection committee. We saw some fantastic films and wonderful creations this year, and were proud to play a part in the international competitions. We as ‘the jury’ wanted to make a statement. We believe that more films should have been awarded a prize. Not because it was too difficult to pick just four winners, no — that was fairly easy. We believe that more artists deserve a prize, and would prefer the budget for prizes to be split up to go to more ‘winners.’

So as ‘the jury,’ we were happy that we managed to pick six winners (instead of just four) and give three special mentions this year. On top of that, we also presented a list of films that deserved to be noted as well — films we could not award with a prize, but were too good not to mention: If it were up to me, I would have invited (and paid) all 80 filmmakers/poets and only given prizes as an honor instead. Because the quality of those 80 chosen poetry films was so high.

The jury also felt that the selection committee left a lot of more experimental films out that we would have appreciated seeing. That is, of course, their right. It’s all about taste, after all. This year’s selection, like selections of previous years, was stuffed with many films from art schools and production companies. And that’s OK — these films have a great (technical) quality.

But the jury missed the not-so-perfect films. We missed the loner with the camera and the crazy idea. We often missed a strong poetic involvement. Brilliant technique, fantastic visuals, strong sounds and music, moving performances and lovely creatures do not always make up for the lack of a poetic experience. We really think we should encourage everyone who wants to make a poetry film (and to submit it to ZEBRA) to do so. No matter whether she or he only has a cellular with a camera and an idea, just go for it. Art should not be about equipment and/or budgets.

If you see hundreds of really well-made films — films that they could broadcast on TV any night of the week — then we jury members were looking for the one film that no one will show on TV. We tried to look beyond the well-made surfaces. If, as an artist, you feel a pressure to say something, then: say it with pressure, and not only with the perfect surface a consumer-orientated society supplies you with. Many of the films we saw, said: here we are, ready to be melted, we already fit in your slots. Maybe young filmmakers and artists shouldn’t cooperate so eagerly right from the start.

But that’s something else altogether. We were there to pick winners. And yes, there were films that blew me and the other jury members away. Films that raised questions but left out the answers (Off the Trail; Director: Jacob Cartwright & Nick Jordan – Poem: “Endless streams and mountains” by Gary Snyder). Films that had the perfect surface and a wonderful technique, but also connected with the poem and left plenty of room for the viewer (Steel and Air; Director: Chris & Nick Libbey – Poem: “Steel and Air“ by John Ashbery). And films that stopped being ‘perfect combinations of different artforms’ and simply were stunning because they ‘simply were,’ in their own right, a work of art, pure and elegant (Goldfish; Director: Rain Kencana – Poem: “Goldfish“, by Shuntaro Tanikawa).

Some of the films showcased a strong sense of humor combined with a political impulse (Calling All; by Manuel Vilarinho – poem: “Chamada Geral” by Mário Henrique Leiria). Others just made you smile all the way through (Hail the Bodhisattva of Collected Junk; Director: Ye Mimi – Poem: “Hail the Bodhisattva of Collected Junk”) or cry (Process:Breath; Director: Line Klungseth Johansen – Poem: “Process:Breath“ by Line Klungseth Johansen). The jury and winners take the stage (photo: Thomas Mohn)

I’m not going to describe all of the films we picked. (See the complete list on the ZEBRA website.) I hope that they will be all online in due time (and on Moving Poems from that day on).

But for now: Google them. Search them. Take your time looking for those that already are online. Listen and watch. See them again and again. And dive into the marvel that they are. 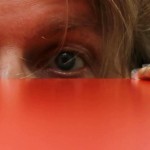